It was great to interview Milo. He seems very nice and took the time to remember my name. I was on another conference call interview with him back in 2015 as well. I loved him in “Heroes.” I don’t watch “This Is Us” that regularly, but he’s great in it from what I’ve seen. I know he and the show are very popular and loved. I hope you enjoy our brief interview!

Here is the Video!

Question: This show itself was like a defining moment, in some ways, right? Like it completely changed [from] a man in his early 40s to America’s Dad. How’s that? I mean, did you expect this in your journey as an actor, and how has the near death experience shaped you now?

Milo: I mean, I’ve always been told I look younger than my actual age. So, to play my actual age and even play older has been really nice. The subject matter of being a dad, being a husband, being a friend, brother, being a war buddy, being a support member in AA, we’ve covered a lot of ground with Jack, and I wasn’t expecting it. It’s just really been a blessing to be able to play a mature man, a good man who is flawed that I think everybody can learn from, everybody can relate to, not just men, but women. Families can look at this guy and draw something, some kind of inspiration from the way that he views family, he lives his life, the dedication he has to his wife and kids, and the commitment to be strong of his own shortcomings to protect his family. So, for me, it’s just the whole thing; the whole experience has just really been a blessing.

Question: …Of course, he has some flaws, but he’s like this idyllic man, right? Which is how the show is set him up. Now we’re exploring more flaws as the time goes [on], but was that a challenge, as an actor, [to play an] idol sort of and still bring out the flaws and make him relatable?…

Milo: I mean, Jack definitely has very big shoes to fill, even for me, Milo, out in the world, because of how beloved the character is, when I’m out in the world, I definitely feel the good graces that get showered onto me because of Jack and [understand] how important he is as a character to people in their daily life. But, playing the flaws, I mean, there’s been one or two moments in the five years we’ve been doing this show that I’ve been playing Jack that I’ve disagreed with how he’s handled something, but I also accept and understand that Jack is an individual of himself. We may share certain qualities. We may look the same, sound the same, present similar, but there have been a couple times where I just completely disagree with Jack, but I also understand that he’s a character. When the cameras start rolling, I myself, Milo, don’t exist, and only Jack lives. When the cameras call cut, then all of a sudden, Jack gets put to the side for a moment, and then, I resume my life. So, I’m always just trying to honor the character I’m playing, the experiences. He’s lived through alcoholism, through fatherhood, through marriage, through war. I’m just trying to honor those different life experiences that I think a lot of people can relate to.

Suzanne: I asked a bunch of people on Facebook and Twitter that were really big fans of the show what they would ask you, and I got a few good questions. Krista wants to know, if you could give Jack one piece of advice, what would it have been?

Milo: Man, I don’t know if there’s any advice I could give Jack. I feel like in a strange way it’d be like giving advice to my father. Jack is a man of a certain generation and a man built of a certain fiber. I don’t know that Jack needs a lot of direction, but I think what Jack needs to know is that he’s not alone, that he has support, that he has people that care for him and love for him. He doesn’t always have to be the epitome of strength; he can actually depend on people at times. I think a lot of men of that era, born in the 40s, experienced 50s and the 60s, maybe went to war, came home started a family went through, you know, financial booms and losses and things like that, I think, also just where men were in terms of positioning and kind of not really being allowed or able to speak about what was impacting them and affecting them. I mean, I’m 40 now. I feel like as my generation, I was able to really talk about how we felt, how we felt about something. So, I think the only thing I’d say to Jack is, “Hey, man, you’re not alone. There’s a lot of us going through life, and we’re here to help.”

Suzanne: Great. And this show has been so popular right from the beginning. Why do you think that is?

Milo: It’s always been the relatability. I think that’s been the success of the show. Every single person, it doesn’t matter where you’re from or who you are, can relate to family, can relate to the struggle of not having a family, can relate to the happiness and joy and pain and everything that life throws at you. It’s incredibly, incredibly telling of the human story, the human condition, human emotion, experience. I think Dan Fogelman and our writers just so tapped into that, into also knowing what people need. People need that outlet, especially the last year that we’ve had. People need to know that, again, they’re not really alone from the rest of us.

Question: …How has [it] been working during this pandemic, because this is hard for everyone, like as an actor, and as an American, as a person, a human being living through these times, having this opportunity and being able to work?

Milo: I have the opportunity. I’m fully aware that it is a huge opportunity to be able to work when a lot of people [weren’t]…So, I’m grateful. At the same time, I understand people have consumed just about everything the internet and the television networks can offer, so I think people are tapped out, and they need something new. So, I’m grateful to be a part of the show that can provide that. For us on production, we have our safety protocols. We all follow them; we all look out for one another. It’s not just about my safety or my co-star’s safety; it’s about our crew safety. And I think all of us have been respectful knowing that we have the opportunity to work and contribute more than to just our own households but to the households of a lot of the world. So, we’re we’re grateful. We’re happy we work through the conditions, and I’ll tell you what, when I’m on set, morale is still pretty high.

Question: …You’ve had a long career and you have a lot of great things, and then I feel like, and I may be wrong, but [there was] like a period where I didn’t see you…then again this great thing. What is your advice to a younger you or other actors who want to pursue this?

Milo: Keep at it. Never give up. Always be true to yourself. Have a line and don’t let people cross it. Push through when you hear no; find a way to make that yes. When people tell you, “You can’t do this,” prove them that you can do this and more. I think so many times, a lot of people fall out of the acting career or the creative space, because they’re critiqued. They’re told that they’re not good enough, or they’re led to believe they’re not good enough, because somebody’s art or somebody else’s creativity was chosen over theirs. It’s really tough. It’s it’s hard not to take it personally. You know, I tell people, “You have to take it personally,” because when you’re personally kind of told, “No” – I know when I am, I push through. Prove people wrong; always prove people wrong and show you deserve to be in that place. You got to work hard at your craft. This isn’t something – I mean, I live and breathe this. I live and breathe my work, I do. If you can’t do that, you’re gonna have a hard time. So, I’d say, “Just push through.”

Question: …Is it possible for Heroes to come back and for us to see [unintelligible]?

Milo Ventimiglia stars as Jack Pearson in the hit NBC drama “This Is Us.”

Ventimiglia has been nominated three times for an Emmy Award forOutstanding Lead Actor in a Drama Series. He was also nominated for a People’s Choice Award, Critics’ Choice Award and won an MTV Movie Award for his work in the show. He was named the 2019 Man of the Year by the Harvard Hasty Pudding Theatricals, the oldest theatrical organization in the U.S.

Ventimiglia has built an impressive resume of television and film credits and also embraced the power of the Internet and new media with numerous projects.

One of Ventimiglia’s early signature television roles was as Jess Mariano on the hit series “The Gilmore Girls.” Other notable television work includes “Heroes,” “American Dreams,” “Mob City” and “Gotham.” He also has had guest-starring roles on several series, including “The Fresh Prince of Bel-Air,” “CSI,” “Promised Land” and “Sabrina, the Teenage Witch.”

Ventimiglia recently starred in the Disney feature film “The Art of Racing in the Rain,” an adaptation of the international best-selling novel by Garth Stein. He also starred alongside Jennifer Lopez in the romantic comedy “Second Act” and had a memorable cameo in “Creed II.” He starred alongside Sylvester Stallone playing his son, Rocky Jr., in the sixth installment of the Rocky series “Rocky Balboa. He worked alongside Adam Sandler in “That’s My Boy” and “Grown Ups 2,” and with Nicole Kidman in “Grace of Monaco.” Other film credits include Xan Cassavetes’ “Kiss of the Damned,” “Wild Card,” a remake of the 1986 Burt Reynolds drama “Heat,” alongside Jason Statham, and “Killing Season,” with Robert De Niro.

With his production company DiVide Pictures, Ventimiglia has both scripted and alternative projects in active development with a variety of studios and networks. Also, under the DiVide banner, he launched two comic book titles with Top Cow Productions.

Ventimiglia is involved with the Iraq and Afghanistan Veterans of America organization (IAVA), which supports veterans who need help when they return home from the war. He recently traveled across three continents to five countries with the USO to spend time over the holidays meeting with the servicemen and women of the U.S. military. Additionally, he took time during his hiatus from “This Is Us” and traveled to Kenya with the nonprofit organization Comic Relief to see first-hand the challenges kid face and bring awareness to the positive work and impact of Red Nose Day.

Everyone has a family. And every family has a story. “This Is Us” chronicles the Pearson family across the decades: from Jack (Milo Ventimiglia) and Rebecca (Mandy Moore) as young parents in the 1980s to their kids (the big three), Kevin (Justin Hartley), Kate (Chrissy Metz) and Randall (Sterling K. Brown) searching for love and fulfillment in the present day along with Toby (Chris Sullivan) and Beth (Susan Kelechi Watson). This grounded, life-affirming dramedy reveals how the tiniest events in our lives impact who we become, and how the connections we share with each other can transcend time, distance and even death. 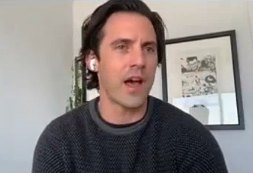