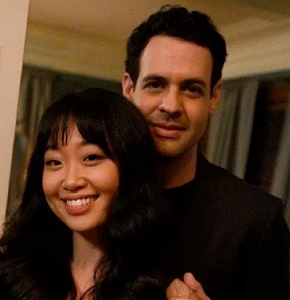 This was a day full of many NBC and Syfy interviews, but this was the most fun and relaxed of all of them. These two are great and funny. We had a good time. I hope you enjoy it! This is a fabulous show.  It’s so funny that Andrew used to be a computer programmer and engineer, when he’s one of the few characters on the show who’s NOT one of those! That’s hilarious.

Suzanne:   Do we get to see you singing and dancing a lot more in the rest of the season?

Alice:   Yeah. We definitely sing and dance in more.

Suzanne:   Are you allowed to tell us any of the songs?

Andrew:   I don’t think it matters, actually – for the next episode, anyway.

Andrew:   I sing the song “Drift Away” in the next episode. Yeah, and then after that, I don’t think we can say.

Alice:   There’re some throwbacks in there.

Andrew:   We all get to sing some cool stuff for sure.

Suzanne:   Yeah, that’s what’s great about the show; you get all different kinds of songs, recent, old, and all of that.

Andrew:   How often – do you do you always recognize the songs, or are you like, “I don’t know that one.”

Suzanne:   I’m older than I look, so I don’t recognize all the new ones so much. I know all the old ones.

Question:   …[This] may be a hard question, but free to answer [how] you feel, but in the spirit of the events of this past week, the Asian American community, you’ve been active for a while and worked. What’s your thoughts on Asian American stories? You know, in terms of the prejudice that’s faced, because we don’t see that as much on screen I feel as much as we see…This is a reality in which eyes are opening now. So, any words on that, and how’s your experience been?

Alice:   Yeah, totally. I mean, I think it’s very complex, because, yeah, there’s obviously a lot more. I mean, obviously, Asian stories are important, that’s the bottom line. I feel like our stories need to be told, and it’s a lot better. I think things have gotten a lot better in Hollywood and stuff, but I do still feel like there’s a lot more room for growth and more room for other stories, but I think it’s important that we’re being seen, and we have visibility and the more we can, [the better]. I always think there’s room for more. So, yeah.

Question:   …[You] left computer engineering…Can you talk a little bit about that transition? I’m sure you’ve been asked a lot, but I’m always curious to hear that in person from a person like you. How is that transition and what does it mean for you to be on this show? This is a huge, huge thing for you.

Andrew:   Yeah, well, I started acting as a kid, and then, when I went to college, I don’t really know what I was thinking exactly, except that I was like, “Oh, I think programming is fun.” I think I was actually fairly good at that part of computer science; the rest of the parts were really difficult for me. I don’t think I had quite the quite the brain for it, but the programming I was good at, and I enjoyed that.

I did that, and then I actually got a job at Adobe. The guy hired me and told me that he was going to hire me, but he was certain that I would go to LA and pursue an acting career, because he could tell based on my resume from before that. He hired me, and I was like, “No, no, no, I’m gonna come work for Adobe.” Then, I did exactly what he thought I would do and did not take the job and went to LA to continue acting.

Then, doing the show has been, for me, just really wonderful and exciting, because it’s the combination of a lot of things that I’ve done that I love to do, which is, musicals and singing and dancing and acting, and getting to do that all together on camera is kind of an amazing thing, and getting to be around all these incredibly talented people in this way. It’s just been so, so fun and satisfying, and like getting to watch her do her numbers, it’s just awesome. It’s just awesome. I feel so appreciative for getting to do this.

Alice:   Yeah, I feel like it’s probably different for everyone, because I –

Andrew:   She can roll out of bed and sound amazing. That’s true.

Alice:   No, that’s not true. Singing and dancing for me, yeah, that’s definitely my comfort [zone]. In those areas, I’m like, “Okay.” It’s more acting sometimes where I’m like, “What’s my character really doing and stuff?”

We get together sometimes on the weekends and rehearse if we’re doing it. Like, we’re working on a dance a dance right now. It’s like, we have to get together outside of work to figure out how to do it and help each other, basically.

So, I’d say, definitely – and also, when you’re doing the dance numbers, a lot of them are done in one take. So, if I mess up a scene, they can cut around it; we do another take. But with the dance numbers, if you don’t get it right the whole way through, you’re done. So, the pressure is a lot more, is a lot higher, I’d say, on the musical numbers.

Alice:   Those rehearsals are so fun, but they are challenging. We’re doing stuff that we normally wouldn’t, but it’s so fun.

Andrew:   It’s also just really fun, so maybe that’s why we all feel this way and spend a lot of time. It’s almost sad when you only get to do like three takes if it actually goes really well. They’re like, “Okay, we got it,” and you’re like, “But I just worked for weeks trying to get this great. I want to do more. I want to do more.”

In its second season, “Zoey’s Extraordinary Playlist” continues to explore the feelings we keep buried on the inside, the human impulse for connection and the undeniable healing power of music and dance. Following a tragedy, Zoey (Jane Levy) and the Clarke family begin to recalibrate and navigate their new normal. As she finds herself in a new dynamic at work and in her love life, Zoey’s musical powers will continue to both awkwardly complicate and inform her worldview as she attempts to rediscover joy and connect with those around her.

Featuring inventive musical performances set to hit records from a variety of genres and time periods, “Zoey’s Extraordinary Playlist” won the Emmy Award for Outstanding Choreography for Scripted Programming in its freshman season.

Leeds can most recently be seen opposite Reese Witherspoon in Apple’s “The Morning Show” and opposite Bill Hader in HBO’s “Barry.” Prior to that, he recurred for two seasons on Epix’s “Get Shorty” and starred in the film “Office Christmas Party.”

Other television includes a series regular role on the ABC sitcom “Cristela,” a four-season arc on “Bones” and guest starring on “Veep,” “Silicon Valley,” “Modern Family,” “Shamless” and “It’s Always Sunny in Philadelphia.”

As a writer, he has written pilots for various networks, including ABC, CBS, NBC, FOX, USA and Showtime.

A member of the main company for the Groundlings, Leeds graduated from Stanford University with a degree in computer science. He splits his time between Los Angeles and New York.

In film, Lee was most recently seen sharing the screen with Jillian Bell in Amazon’s “Brittany Runs a Marathon,” which won the Audience Award at the Sundance Film Festival. Other films on her resume include Netflix’s “Sierra Burgess Is a Loser, “Wish Upon,” Jack, Jules, Esther & Me” and the upcoming “Dream Years.”

Lee, a Chicago native, attended an open call while she was a student at NYU and was immediately cast in the Tony Award-winning Broadway production of “Spring Awakening.” She then went on to be in the original company of Julie Taymor’s “Spider-Man: Turn Off the Dark” and starred as Heather Duke in the cult-classic Off-Broadway musical “Heathers.” 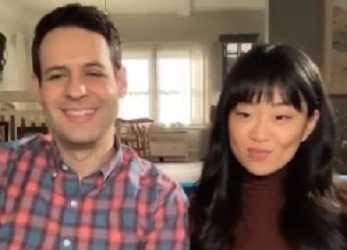