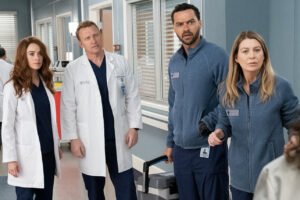 ABC Grey’s Anatomy– Thursday, 10/20, 9:00pm Promo “Let’s Talk About Sex” – Bailey recruits the interns to create a series of social media videos informing teens about sexual health. The videos, filmed at Grey Sloan in front of a group of high schoolers, hit home as a student has medical complications during her visit. Elsewhere, Meredith and Maggie learn something new about Zola on an all-new episode of “Grey’s Anatomy” airing THURSDAY, OCT. 20 (9:00-10:01 p.m. EDT), on ABC. Guest starring is Kate Walsh as Addison Montgomery, E.R. Fightmaster as Kai Bartley and Marla Gibbs as Joyce Ward.

ABC Grey’s Anatomy: Thursday, 10/12  Promo “Wasn’t Expecting That” – The attending surgeons and interns work together to solve a medical mystery when a college kid comes in with what first looks like food poisoning but has escalating and dire complications. Meanwhile, Jo spends her day off with Bailey on a new episode of “Grey’s Anatomy,” THURSDAY, OCT. 13 (9:00-10:01 p.m. EDT), on ABC.

ABC Grey’s Anatomy: Thursday, 10/6 Promo “Everything has Changed” – After a long six months, Grey Sloan Memorial has reinstated its residency program. A group of talented and striving young interns has been recruited as the attending surgeons work to rebuild the program to its former glory. Meredith, still functioning as the interim chief, sees Nick for the first time since she rejected his offer to move to Minnesota. Meanwhile, Bailey tells Richard she is not ready to return to work; Levi works up the courage to break disappointing news to Jo, and things turn awkward when Link realizes he has met one of the interns already. With Amelia and Maggie’s help, the new doctors are thrown into their first day on the job dealing with injuries from a recent tornado on the season 19 premiere of “Grey’s Anatomy,” THURSDAY, OCT. 6 (9:00-10:01 p.m. EDT), on ABC.