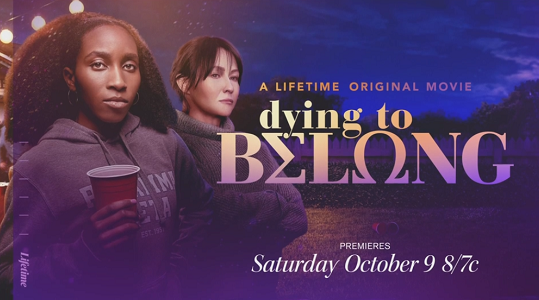 Interview with Shannen Doherty, Favour Onwuka, and Jenika Rose of “Dying to Belong” on Lifetime by Suzanne 9/14/21

This movie is a remake of a 1997 film. It’s very sad that sororities and fraternities still have hazing, even all of these years later. I enjoyed the movie, which airs Saturday, 10/9. I hope you do, too.

LIfetime had a press day, which included this movie and part of its cast.  Shannen Doherty plays the mom of a girl, Riley, that is hazed at her university’s sorority. Favour Onwuka plays the girl’s friend, Olivia, who is also hazed and tries to get information about the sorority for a newspaper article. It was great to speak with them all, and the executive producer, Danielle Von Zerneck. Shannen has been battling cancer for a while, but she looked great!

My question has my name on it. All of the other questions are from other journalists.

MODERATOR:  Our next panel is “Dying to Belong.”  Please welcome back Shannen Doherty alongside executive producer Danielle von Zerneck and our stars Favour Onwuka and Jenika Rose.  Thank you guys for being here.  We really appreciate your time.  Our first question is from Jamie Ruby.

QUESTION:  Hi, guys.  Thanks for talking to us.  This is for the actors.  I’m just curious did you know how many people die from hazing at sororities, because I definitely learned about that after watching this, and how did that affect how you played your characters?

FAVOUR ONWUKA:  Yeah, that was something I found out about while researching on this project, because being in Canada you don’t really have sororities here, so it was a new thing for me to learn about, and it’s so sad to find out that people are still dying.  It’s still happening.  It’s terrible because it’s so senseless.  It’s such a senseless way to die.

JENIKA ROSE:  And in the ways that they die, how they’re provoked by their so-called “sisters,” it was just it was really chilling to read and learn about.

MODERATOR:  Thank you.  Our next question is going to be from Suzanne.

Suzanne:  Hi.  I was wondering, Shannen, you’ve been acting since you were a little kid.  There are a lot of young women in this movie.  Did you have any particular advice for them? 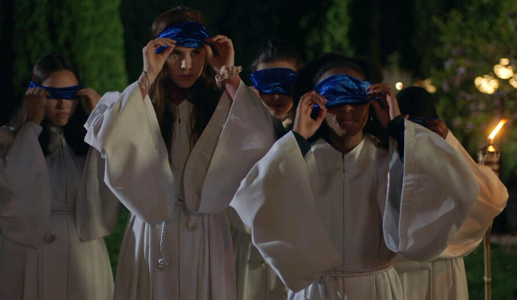 SHANNEN DOHERTY:  I don’t think so.  You would have to ask these two, beautiful girls.  Yeah, I don’t think so.  I got very, very, very lucky this year in the people that I got to work with.  Danielle and I have done a movie before together, and as a producer she’s phenomenal and she’s caring.  She understands you.  She hears you.  She never gets flustered.  You don’t.  I mean, she’s really, really, really special and wonderful.  Our director, Gail Harvey, who I’ve also worked with before, it’s just I love her madly.  But working with these two girls was sort of a, you know, I’m going to be brutally honest, you never really know what you’re getting with people this age, you just don’t, and what I encountered was not only two hard working girls who constantly were putting their best foot forward, but they’re also kind and considerate and intelligent.  I don’t know if this is answering your question, but I just felt like I had to say that about everybody in this room right now, because I was really taken aback by how wonderful — and I think I said something to Danielle like maybe first or second day — I was like, God, like they’re really talented — really, really talented.  So I don’t know.  Did I give you any advice?  I didn’t have to.  Like they’re pros.

JENIKA ROSE:  You did a lot without like specifically being like, “Hey, here’s a hot tip.”  It was more just like observing you, and then you’d just like come over to us and just say something and then walk away, and it was wisdom, but I don’t know if you knew that it was, but it was very helpful, and there are lots of like little things that just pushed us forward.

FAVOUR ONWUKA:  Yeah.  And to add to that, it was a lot of modeling, at least for me, because this was my first lead, so I was taking notes from you.  I was like, “Oh, okay, that’s what Shannen’s doing, and she looks relaxed.  I should be relaxed.”  You know, I was just watching you and learning, and there were times where I’d come up in between — There was one particular time where I came up in between and I was like, “How do you do it,” and you were just like, “Well, this is what I’ve learned,” and you told me that, honestly, it takes time.  It’s something you build up over the years and, yeah, I really — I wrote, I took down notes.  Everything you said I was like, “Must do this.”  So, yes, thank you for all your advice.  It was amazing to have you.

JENIKA ROSE:  Thank you so much.

SHANNEN DOHERTY:  Thank you for being, like, the absolute, you know, beautiful, dedicated actors that you both are.  You honestly blew me away, and I have seen the movie.  I understand that neither one of you have yet.

SHANNEN DOHERTY:  But I have seen it and you guys are phenomenal in it.  Everybody did a great job and, Danielle, obviously, you should be proud, which I know you are.

DANIELLE von ZERNECK:  Very proud.  And I just, sorry — not to make this a love fest — but, at the same time, Shannen, like, the generosity of spirit that you bring, obviously, to every frickin’ thing you do was so — It was a beautiful thing to see all of these really newer to the form actors — (phone rings.) Oh, shit.  Sorry, guys.  And —

DANIELLE von ZERNECK:  Oh, my God.  I’m sorry, guys.  Okay.  Newer to the form, but watching you, they were so in awe and you just, as they said, watching that kind of generational thing, it was gorgeous.  Okay.

SHANNEN DOHERTY:  Did I start this by saying that she never gets flustered, because we just saw her get all flustered.

MODERATOR:  Thank you, guys.  Our next question is from Jay Bobbin.

QUESTION:  Hi.  My question, actually, is for Danielle, and if your phone goes off again feel free to say anything you want; I’m fine.  Your dad is one of the prolific greats in this field, and when you tackle a project, and I know you’ve been on this side of the camera for a while, do you consult with him about the projects you want to do?  And then I’ve got a follow up for you.

DANIELLE von ZERNECK:  Okay, yeah, yeah.  I mean, how many people can get mentored by their father and it be meaningful?  I mean I feel very, very grateful to have that human in my life, and I love that Shannen’s been a part of both of those as well; like, that’s crazy, you know.  And, yeah, no, I love — Yes, I did always talk to him and not just about sort of — I think for me it was a little like, “Oh, I really think that there is a new way for this story to be told,” so that was like always my impulse with both movies and, especially this one, I was like (makes noise.)  I was talking to Favour and Jenica about this.  Like it’s like sorority movies are like female-ish — male gaze, normally and really thought like, “Oh, let’s put a female gaze on this all around.”  And my dad has always been incredibly supportive.  He loves it.  He loves that TV movies are still have something to say, and I think are really having an interesting renaissance, and I love that the definition of a TV movie is changing, and it’s nice to be part of that and to sort of still have my dad be here to see it.

QUESTION:  My follow up for you is – you did so much work in front of the cameras, what do you feel your arc was as a producer, because you knew what it was like to have the camera on you, how was it for you to be behind the camera?  When I say calling the shots I mean that loosely, not like a director, but how was that transition for you?

DANIELLE von ZERNECK:  It was long and arduous and the only thing I can say is that being an actress for a small amount of time the best thing about it is that every time you do an audition you’re basically selling yourself.  You’re selling, right?  And so when you move into producing and you’re selling a project it was so much easier to sell something that wasn’t me.  And, so, that, in a weird way, the acting stuff was really, really helpful, all the skills I learned.  And what’s crazy now, like I really don’t remember being an actress, it feels very foreign to me, so I’m always like so in awe of actors, because they have to — I don’t know.  I just feel like the work that they have to do is sometimes not noticed as much because they have to keep it different.  It’s like I get to go and I sign things and I run around, but actors sort of have to keep their emotional sanity about them, and these skills that now I just feel like I don’t know how you do it.  I really don’t.

QUESTION:  Thank you very much.

MODERATOR:  Thank you.  We have time for one more question and that’s going to be Jamie.  Jamie.

QUESTION:  Sorry.  I’m just going to say did you guys research anything like into mental health?  I was just curious kind of how you prepared for that part of it.

JENIKA ROSE:   Yeah.  My character has severe general anxiety disorder, and I didn’t know too much about that.  I just sort of knew about people have anxiety, but this was a specific heightened part of anxiety, and I actually have a severe learning disability, so a lot of my character’s experiences were things that I’ve experienced myself in the past when I was younger and being around girls, especially.  So a lot of the situations that my character was in like really rang true, and I did have a best friend that I’ve had for a really long time, that was sort of Favour’s character, that helps one through those times and those people are really special.  So I really connected with that part of the anxiety and just I really wanted to show it in its true light and represent it properly, because I’m sure some people that have it, I didn’t want them to watch it and be like, “Mm, I wouldn’t be like that in that situation.”  So I just really wanted to do my best to make it as truthful as possible. 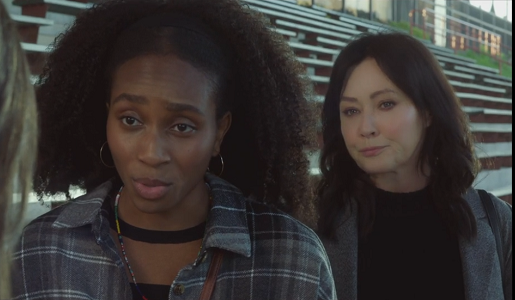