I’m very honored to have interviewed Tonya because she is an amazing actress who started out on soaps many years ago and was also a Broadway star (and Tony winner!) as well as becoming a great actress on many TV series such as “Fear the Walking Dead,” “Madam Secretary,” “Women of the Movement,” and my personal favorite, “Gotham,” where she played the creepy Mrs. Peabody.  Now she’s also become a film creator with her new movie “Red Pill.” You can rent it on Amazon!

Tonya’s first soap job was playing Heather on “As the World Turns,” and then she went on to “All My Children” for the epic role of Livia Frye Cudahy, off and on from 1991-2009. That’s the main reason I wanted to speak with her because I used to watch her on that, and we have a great All My Children page.  She is also an amazing singer who’s been acting and singing on Broadway since 1981, and she won a Tony for her role in “Jelly’s Last Jam” (as well as having been nominated 2 other times). She also does concerts, and she really is a very soulful singer. Oh, and she’s been my Facebook friend for many years because she’s the type of person that interacts with her fans.

She decided to finance, write and direct her own horror movie, “Red Pill” during the pandemic. I really don’t think there’s anything she can’t do. I could easily have chatted with her for hours about other aspects of her career, but we mostly talked about the soaps, singing and “Red Pill.”

I hope you enjoy our Zoom interview! We will be putting up a transcript at some point.

From IMDB: Tonya Pinkins has won or been nominated for nearly every award there is in the American theater. She is a Fulbright Specialist. As a producer, writer and director she conceived “Truth and Reconciliation of Womyn; Narrative Stories and Songs for the Soul in ten minutes or less.” The women involved in this project span the globe in age, culture and ethnicity.

Tonya Pinkins (born May 30, 1962) is an American actress and filmmaker. Her award-winning debut feature film RED PILL was an official selection at the 2021 Pan African Film Festival, won the Best Black Lives Matter Feature and Best First Feature at The Mykonos International Film Festival, Best First Feature at the Luléa Film Festival, and is nominated for awards in numerous festivals around the globe. Her web-series The RED PILLING of AMERICA can be heard on her podcast “You Can’t Say That!” at BPN.fm/ycst

She is known for her portrayal of Livia Frye on the soap opera All My Children and for her roles on Broadway. She has been nominated for three Tony Awards (winning one), and has won Obie, Lortel, Drama Desk, Outer Critics Circle, AUDLECO, Garland, L.A. Drama Critics Circle, Clarence Derwent, and NAACP Theater Awards. She has been nominated for the Olivier, Helen Hayes, Noel, Joseph Jefferson, NAACP Image, Soap Opera Digest, and Ovation Awards. She won the Tony Award for Best Featured Actress in a Musical for Jelly’s Last Jam. 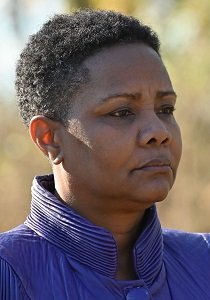 The eve of the 2020 election, a posse of progressives ride into red country armed with heart humor and naiveté.

From the mind of Tony award-winning actress, Tonya Pinkins comes a progressive dystopia nightmare. Shot by cinematographer John Hudak Jr., Red Pill is a visually stunning metaphor for all our fears and a reminder that there are worse things than death.

As the friends arrive at their “Super-Host” housing, they encounter signs that point to possible trouble and before the weekend is over their fight for the country becomes a fight for their lives.

After you watch the movie, listen to her Audible Book, “Red Pill Unmasked!”