This was such a fun interview! Mark is hilarious. I really enjoyed speaking with him. I really love his character on “Blood & Treasure.”  I hope you enjoy our video! Don’t forget to watch “Blood & Treasure” on Paramount+. This Sunday, 10/2, is the season finale. 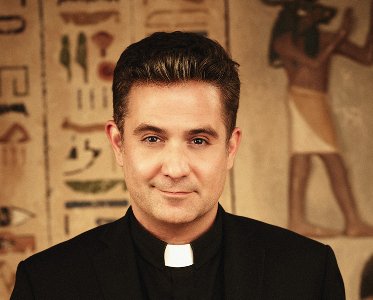 Actor and comedian Mark Gagliardi is one of the main stars of the Paramount+ series BLOOD & TREASURE (plays ‘Father Chuck’) – new episodes of the 2nd Season drop on Sundays!

Additionally, Mark co-hosts the podcast “We Got This” with fellow comedian Hal Lublin – each week, Mark and Hal sit down to settle all the small debates that are a big deal to YOU – once and for all. No subject is too small for Mark and Hal to tackle! Even though you may think it’s an impossible puzzle to solve, don’t worry… We Got This.

He is also known for the critically acclaimed Emmy-winning series DRUNK HISTORY and THE THRILLING ADVENTURE HOUR.

IMDB bio: Originally from Tennessee and trained at DePaul in Chicago, Mark Gagliardi is best known for the viral hit ‘Drunk History’ and his work on stage in ‘The Thrilling Adventure Hour’, a monthly live hit show and podcast at Largo in Los Angeles. He is a veteran of The Second City and National Lampoon, improvises regularly with the record-breaking group Freedom Snatch, and works at Disneyland and Universal Studios as an actor and improvisation coach.