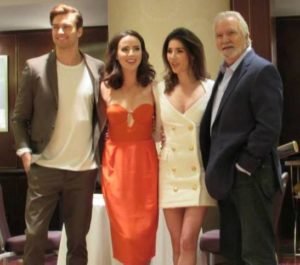 B&B has disbanded its official fan club. “The Official The Bold and The Beautiful Fan Page” is now on  Facebook, and all the latest news can be found on Twitter. Also, at www.boldandbeautiful.com fans can find live streaming of special events and info. that will keep you informed daily of what’s going on behind the scenes, sneak peeks at things to come, locations and dates of public appearances as well as how to independently network with your favorite actors from B&B.

This page can be found on our old site.

For an autographed headshot, you may write directly to the specific actor
c/o “The Bold and The Beautiful”
7800 Beverly Blvd.
Los Angeles, CA   90036 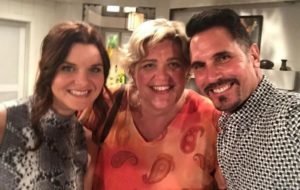 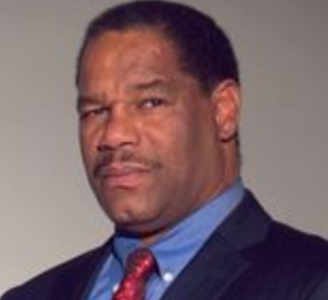 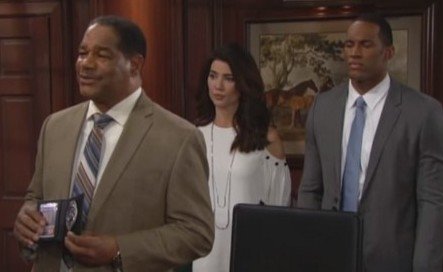 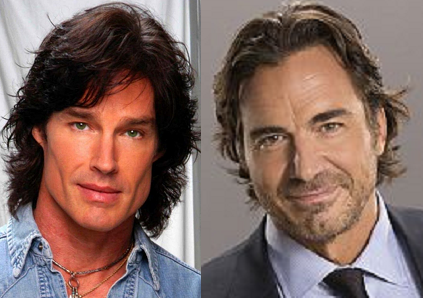 Ridge grew up in a rich family, with lots of love from his parents, who doted on him (especially his mother, Stephanie).  When played by Ronn Moss, Ridge was a very quiet but romantic guy. He was always torn between two women (one of them usually Brooke). He seemed to let his mother dictate his life. Eventually, he stood up to his mother, but it was clearly difficult for him.

Brooke is the love of Ridge’s life and always has been. He was also married to Taylor and the younger Caroline, and engaged to Katie, and the older Caroline, but Brooke is always where his heart has been. They’ve been married eight times. This last time seems to be the final marriage for both, but we’ll see.

Ridge sired twin daughters, Steffy and Phoebe, and son Thomas, with Taylor. Phoebe died in 2008 in a car accident. He and Brooke have R.J., who’s younger than the others.  Ridge, Taylor and Brooke are all grandparents now.

Ridge is a designer in his parents’ fashion firm, Forrester Creations.  Although he grew up in a rich family, he has a big, kind heart.  In 2014, Ridge (now played by Thorsten Kaye) fell out of a helicopter and almost died. He temporarily lost his memory and his design skills. Caroline helped him get these back.  His personality changed since then. He seems to get irritated more and speaks out more. He’s more ascerbic and has trouble controlling his temper. After some struggling with his new personality, he and Brooke married for the last time. They both seem to have grown up some and work out their problems rather than splitting up.

Ridge and his daughter Steffy are co-CEO of the family company. 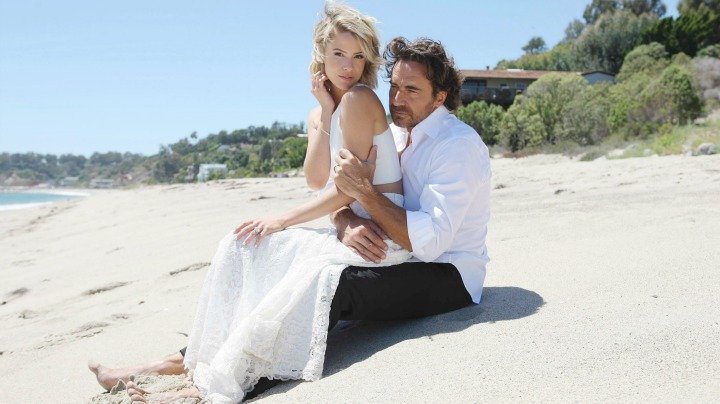 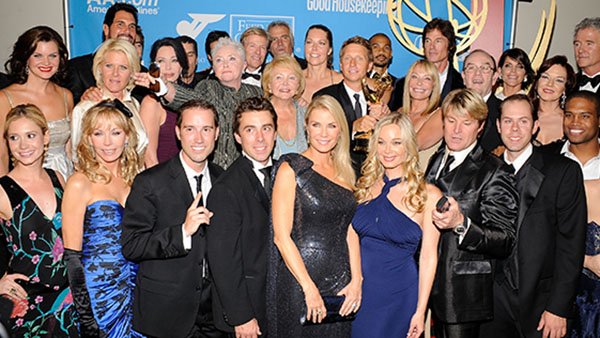 Steffy returns at the end of May. 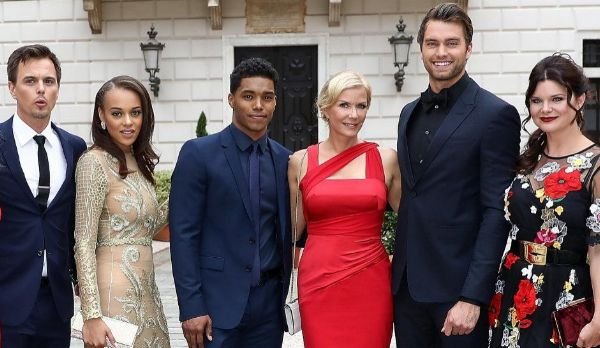 Most of this Info from Internet Movie Database

Other TV Show Cast Lists From The TV MegaSite 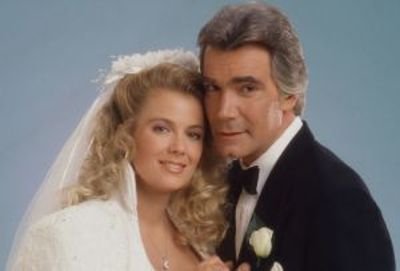 Please let us know if there’s anyone that you think we should add!

Most of this Info from Wikipedia or Internet Movie Database

Other TV Actor Birthdays From The TV MegaSite 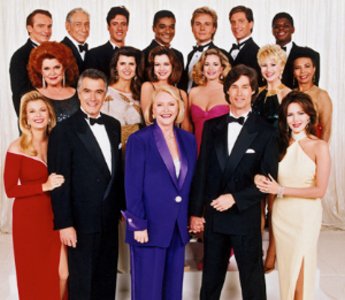 Where to find your favorite B&B actors!

Linsey Godfrey (ex-Caroline) stars on “Days of Our Lives” as Sarah.

Katrina Bowden (Flo) stars in the movie “Definition Please” in 2020.

Jim O’Heir has a recurring role on “Bless This Mess” Tuesdays  on ABC. He also appears on one episodes of the YouTube series “Liza on Demand” this year and has many movies coming out. He also guest-stars on “Bull” Monday, 2/3 on CBS.

Denise Richards (Shauna) stars in a new series, “Paper Empire” and has a few new movies coming out.  She also still appears on “Real Housewives of Beverly Hills” on Bravo.

Nia Sioux (ex-Emma) is filming a scifi movie “The Code.”

Jacob Young (ex-Rick) has 3 new movies coming out. He hosts “Daytime After Dark” on YouTube.

Reign Edwards  (ex-Nicole) has a recurring role on “MacGyver” Fridays on CBS.

Lindsay Price  (ex-Michael) appears in the sitcom “Splitting Up Together” on ABC.

Robin Givens (Dr. Phillips) stars in the new soap “Ambitions” on OWN later this year. She also appears in “Riverdale” Wednesdays on The CW and appears on “The Real” Tuesday, 11/12.

Kayla Ewell (ex-Caitlin) has 2 other movies coming out.

Rome Flynn (ex-Zende) is part of “How to Get Away with Murder” on ABC and appears in the next installment of Tyler Perry’s “Madea” franchise as well as another movie.

Hallmark Channel has renewed “When Calls the Heart,” starring Jack Wagner (ex-Nick). It returns for Season 6 in 2019 on Hallmark.

Debbi Morgan (ex-Jennifer) appears in the drama “Power” in the recurring role of Estelle on STARZ.

Tracy Melchior (ex-Kristen) has a new movie coming out and also a recurring role in the new BET drama “Games People Play,” out later this year.

Gina Rodriguez (ex-Beverly) has many new movies coming out this year.

Eileen Davidson (ex-Ashley) stars in “The Young & The Restless” on CBS and has 2 movies coming out. Tracey E. Bregman (ex-Lauren) also stars in Y&R. Kelly Kruger (Eva) has a recurring role as Mac. She also has 3 movies coming out.

Mario Lopez (ex-Christian) is co-host of the syndicated TV show Extra and does the voice of Cruz in “Elena of Avalor” on Disney Network. He will make a splash in the new HGTV series Supersize My Pool. He hosts “The CW Dog Honors” Wednesday, January 15 on The CW.

Lauren Koslow (ex-Margo) plays Kate on Days of Our Lives.

Kate Orsini (ex-Dr. March) has two movies coming out and stars in the series “Marisa Romanov” on Amazon Prime this Fall.

Wayne Brady (ex-Reese) hosts “Let’s Make a Deal” daily in syndication and is working on a new movie “WRZ: White Racist Zombies.” He plays Gravedigger on “Black Lightning” Tuesdays on The CW.

Usher Raymond (ex-Raymond) is a successful musician and tours often.

Heather Tom (Katie) has 2 new movies coming out this year.

Patrika Darbo (ex-Shirley) stars in “Ladies of the Lake: Return to Avalon” on Amazon Prime.

A Martinez (ex-Ramon) stars in “Christmas on the Range” in December, 2019 (probably on Hallmark). He has two other movies coming out as well.

Finnegan George  (Will) appears in the first episode of Marvel’s “New Warriors” TV series. No word yet on where/when it will air.

Constantine Maroulis stars in the new series “Psychosis,” which is still waiting for more funding on Indiegogo. He has 4 other movies as well.

Sheryl Underwood (Emmy) appears daily on “The Talk” on CBS.

Jim O’Heir (ex-Matt) has a lot of new films coming out.

Morgan Fairchild  (ex-Dorothy) has some movies coming out and has done a pilot for an interesting-sounding LGBTQ soap called “Mélange” which features many soap stars. It has not yet been picked up. Stay tuned!

Scott Turner Schofield (ex-Nick) wrote and stars in the film “Becoming a Man in 127 EASY Steps.”

Shari Headley (ex-Heather) appears in the new YouTube series “On Becoming a God in Central Florida,” premiering in 2019.

Antonio Sabato Jr. has a few movies coming out.

Lesley-Anne Down (ex-Jackie) has 2 movies coming out.

Pierson Fodé (Thomas) stars in Fritz Mitchell’s sports film “It’s Time” as NCAA football player Brad Gaines and his friendship with Roy Lee “Chucky” Mullins. No word yet on the release date.  He also appears in a new TV movie and in this Facebook series “The Real Bros of Simi Valley.”

Matt Borlenghi (ex-Ziggy) finished a film and is working on a TV movie.

Lorenzo Lamas (ex-Hector) has a few movies coming out this year.

Texas Battle (ex-Marcus) has a few new movies coming out.

Joe Lando (ex-Craig) has a film and a TV movie out this year.

Ashlyn Pearce  (ex-Ali) has a few movies coming out.

Alley Mills (Pam) has a new film coming out, “The Fiddling Horse.”

Daniel McVicar (ex-Clarke) has a new movie, “Creators: The Past.”

Ashley Tesoro  (ex-Kimberly) and husband, Anthony, have created a Christian lifestyle and ministry web series, “Life is for Living TV” formatted for the Internet and for people to view the clips on their phone or computer to be inspired and learn about the Bible. Check it out at www.lifeisforliving.tv or through YouTube.

Ashleigh Brewer (ex-Ivy) has a new movie coming out “On the Edge of Night.”

Obba Babatundé (Julius) has 4 movies coming out. He also appears in “Little Fires Everywhere” on Hulu in 2020 and frequently appears on “S.W.A.T.” Wednesdays on CBS.

Felisha Cooper  (ex-Sasha) has 2 films out this year.

Adam Gregory (ex-Thomas) appears in a new movie, “One of the Good ones.”

Maeve Quinlan (ex-Maeve) has a few movies coming out this year.

Many soap actors star in the digital series “The Bay“. More casting news, updates, and previous episodes can be found at www.thebaytheseries.com.

You can see Annika Noelle (Hope) and Lesli Kay (ex-Felicia) on “Venice: The Series,” which ran from 2009-2017. Watch many episodes for free on YouTube.

Bobbie Eakes (ex-Macy) appears in a new movie, “The Bellmen,” out in 2019.  You can see her and other soap stars in the web series “Tainted Dreams.” Watch Here!

The legendary Paul Williams (ex-Bailey) still acts and writes songs, even though he turns 80 next year. More Info

Ronn Moss (ex-Ridge) tours around; you can see the dates for his concerts at his site https://ronnmoss.com/.